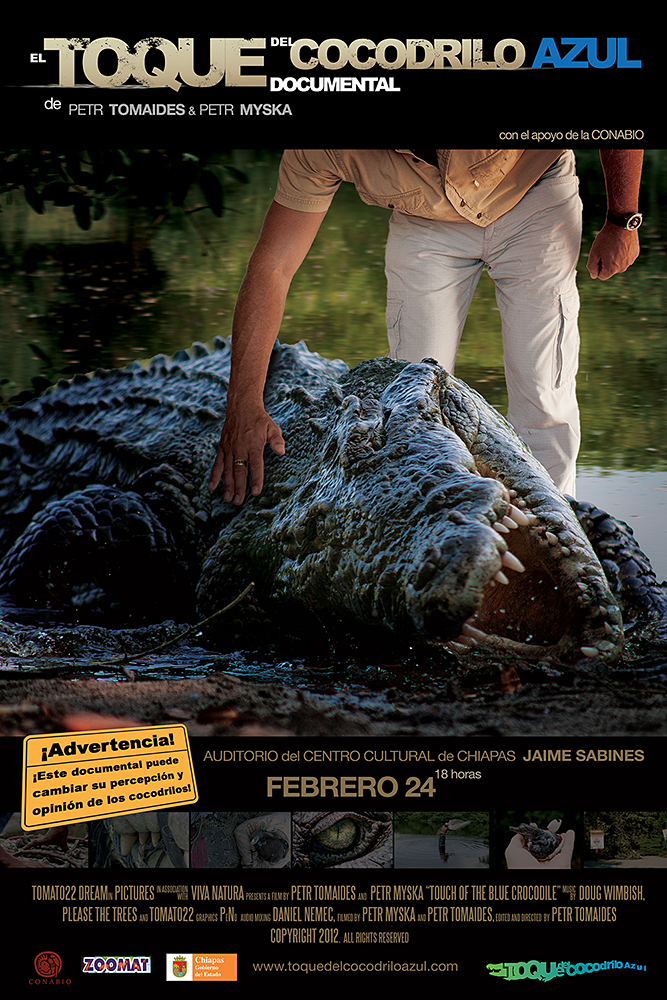 My most complex project to- date. A 93 minute feature documentary on interrelation of wild crocodiles and local people on Mexican Pacific coast. Filmed in a period of 4 years, put together in a crew of 2, myself and the director Petr Tomaides.

The American crocodile (Crocodylus acutus) was almost exterminated in Mexico in the sixties, due to intensive hunting. Today, only one-tenth of its population survives The loss of natural habitat forces the crocodiles to ever closer contact with humans.

ON THE BACKGROUND OF LEGEND about the blue crocodile, our documentary reveals true stories of crocodiles and people. What is everyday life next to such creatures like? What is it like to touch a crocodile? From crocodile god to crocodiles swim- ming in sewers. On one side people’s lives destroyed by a crocodile bite, on the other those, who put their lives in danger to protect them. Unbelievable for most, but every- day reality on the Mexican Pacific coast. The documentary challenges the simplified perception of crocodiles as cold- blooded assassins and offers a surprising, thought-inspiring ending.

Touch of the Blue Crocodile is a movie that crosses the boundaries of a documentary, or at least the boundaries we are used to. These however are not the only limits it exceeds. Although filmed by professionals, it was created without a large budget. Moreover, this is a movie where the principal character is a crocodile and yet it is more about people than animals.

… The documentary, besides showcasing carefully chosen interviews with perhaps all Mexican crocodile specialists, brings above all a great amount of splendid images. Exaggerating only a little, we could talk about visual insatiability, partly influenced by the music video aesthetics, which is after all where director Tomaides comes from… … On the other hand, thanks to this insatiability, this movie is based more on image than on “speaking heads”. … It also brings a number of funny moments in sync with the audio, the camera doesn’t fear to venture underwater and we are even treated to an animation. .. The American crocodile isn’t any small fry and grows to 18 www.touchofthebluecrocodile.com ft. length. Even so, the specialists know how to overcome and trap him. In such moments precisely, the documentary shows its most unique and strongest side. Thanks to the fact that both authors participate in the situation and have become members of the crocodile rescue team, they manage to draw the viewer into the action and transmit the drama of face to face encounter with a wild predator… … In short, it intentionally strives to be different from the usual Discovery Channel format or from what we imagine under the – a tad sterile – words “nature documentary”…

With that, Hublot continues with its assault of infiltrating all types of replica watches sale sports. While this might not win the approval of many replica watches sale WIS, it will more than likely continue to make Hublot successful and help sell more watches. Can you fault the good folks from Nyon, for rolex replica uk capitalizing on this winning formula? Even if it's designed for a small segment of the population... I think no. On a very personal note, I never want to be the person hating on others' success. In fact, I strive and replica watches uk try to applaud it and learn from it instead. Another thing worth mentioning is that while it is replica watches uk unclear just how many hardcore watch-lovers Hublot will keep on attracting to its corner, replica watches sale it is easier to guess when it comes to the affluent people who feel an attachment to one of the many sports, partner companies, or replica watches uk ambassadors in Hublot's stable.